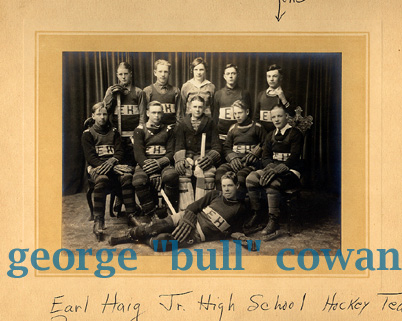 The Bull. That is what my friends and I have decided to call Dr. George McKillop Cowan. As a lad screaming down the left wing in Brandon, Manitoba, he would face down the likes of Turk Broda, the future Toronto Maple Leafs Hall of Fame Goalie. Was it once said that the Bull could score at will and skate like the wind? I don't know. I do know this: If I ask Dr. Cowan that today, he would say no. That is his style, his humility.

I would choose not to believe him. I would like to think of him as scoring at will.

Somewhere along the way the skates were hung up as that lad became a man. A man of God and a man of prayer. In his prime - still not past - he served and serves where God led, not to where the praises and wealth of man lie.

There are many who live so much larger than life. Those that skate like the wind. The Bull did not play in the NHL, did not become a millionaire athlete, did not join the NHL Hall of Fame. He chose to live life larger than the rest of them. For over 50 years he was a loving husband to his wife Florrie. As a humble leader and man of prayer, he has remained steadfast to bring God's Word - Life - to those who have had "no" hope of hearing it. For over 56 years he has served God with Wycliffe Bible Translators (WBT) as a translator finishing a translation of the New Mazatez in Mexico in 1961; as President of WBT from 1957-1981; and from 1963-1971 as Area Director for Africa and Europe. For 7 years he edited Translation ,WBT's magazine. He was Director of Field Work in Mexico, and directed and taught in the England, Germany and Canada and US SIL schools. He wrote a book The Word that Kindles and numerous linguistic and ethnographic articles. After all this he now serves humbly with the title Administrative Assitant of Prayer Ministries for WBT.

Darlene Cantrell of WBT's Prayer Ministries recalls this story about Dr. Cowan. Wycliffe planned to honour him for his 50 years with WBT with a surprise presentation at WBT's annual day of prayer. However, prior to that day, Mr. Cowan stumbled across the programme with his name penciled in for the last hour. He was very curious about this. Thinking quickly, Darlene informed him that someone needed his help for the last hour. On the day of prayer he was under the assumption he was to help present an honour to someone else for their service to WBT. He had no idea it was for him. At the beginning of the hour, the group read two Bible verses and sang a hymn. Dr. Cowan turned to his wife and remarked as to how interesting it was that they should be reading his favourite verses and singing his favourite hymn. In his humble fashion he still had no idea he was the one they were honouring. Only when they addressed him directly as the honouree did he know.

Dr. Cowan has provided Wycliffe Bible Translators with spiritual focus and vision that so few give. He still serves in many quiet ways. Midday, year after year, he may be found meeting with a small group, praying for the Bible translation task around the world. His thoughts on the daily prayer E-mail have stirred many souls and are worthy of being bound in a volume and placed alongside the writings of our greatest preachers and theologians.

For those of us still fixed upon the glitter of our own plastic heroes, we would be served well to focus on those humble heroes whose lives glow with true Light. Those who choose to give instead of take, choose to pray instead of merely worry, those that have forged their way toward an eternal reward . By their example they encourage us to do the same.

A long way from Brandon's wheatfields and winter's gifts of back-yard rinks to young boys honing their hockey skills, you'll find a building in Huntington Beach, California. Out in front you will see a sign that reads "Wycliffe Bible Translators." You will see a plaque that says "The George M. Cowan and Kenneth L. Watters Building." About that Ken Watters--maybe another time. Go through the front doors. Take a left after the lobby. Take a look to your right. In this humble wing of God's Hall of Fame you will see a distinguished face, eyes twinkling through spectacles, with a strong chin and a smile bespeaking a contentment of a man who serves his God well. The Bull.

Scroll up this piece and take a look at the picture above. There's a young lad at the top right. Somewhere along the way he chose God instead of fame. Chose a true reward. Came flying down the left wing, looked life right in the eye and shot... and scored.